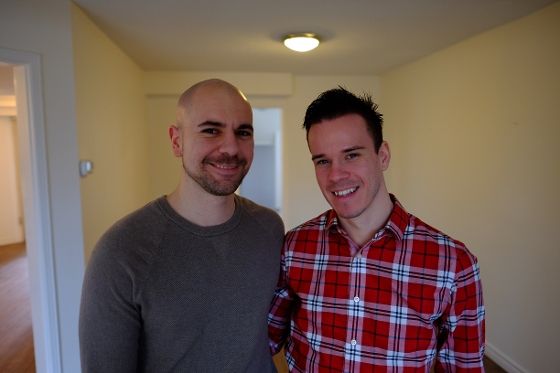 When you are a first-time home buyer, making the decision to put in an offer can be an intimidating hurdle to overcome. And if that decision has to be made on the very first home you’ve seen, that hurdle can be monumental.

Such was the issue for first-time buyers Richard and Jason, who were ready to trade their tiny condo rental for a roomier home.

It took Richard and Jason some time to feel they were ready to buy, something Richard kicks himself for in hindsight. Ideally, he would have bought five years ago, before the GTA market exploded, but at the time he was not ready for that kind of financial commitment. Now that he was, would they be able to find a big enough place within their budget?

Space was a key consideration. They needed enough living space to be comfortable and a second bedroom that could double as a room for overnight guests and storage for the many costumes and accessories that are a part of Jason’s side business as a drag queen.

They also needed parking, not wanting the headache of having to find street parking every day when they came home from work. And Richard wanted a home that had architectural interest, not just another “cookie cutter” place.

They were ready to become homeowners, but they were new to the buying process and Richard, at least, was tentative — something that would come back to haunt them.

The decision to go with Matt and Madalin was a natural one for Richard, a graphic designer who had gotten an insider’s perspective of their business a couple of years earlier when he created their branding. “I learned what makes them so unique,” he says.

Although Jason had a few Realtor friends, he trusted Richard’s judgment and immediately felt comfortable with the couple.

They initially met last spring, but Richard wasn’t ready to really start looking until the fall, and Madalin did a great job of checking in with them from time to time to take the temperature of where they were at. “She was very good at gently nudging us to get us back on track,” Richard says.

One of Richard’s concerns was falling for the first property they saw. “I didn’t want to have to make a decision without having seen many properties first,” he explains. “Ultimately, that’s exactly what happened.”

Richard first spotted the townhome in an online listing and appreciated its size and architectural features. But he didn’t act.

“I didn’t have a full grasp on how quickly buyers were expected to move on a property… There was a bit of naivety there on my part,” he says.

About five days later Jason noticed the listing as well and they finally went to see it. Jason loved it immediately but Richard didn’t. He couldn’t see past the outdated finishes, “weird” bathrooms and atypical entrances.

“I was not ready to commit on it yet,” Richard says. “I was a little too focused on the esthetic, superficial things and wasn’t looking at the quality of the bones, the structure,” although he did appreciate the size and the two parking spaces.

Before they could make a decision, Matt discovered that the home had just been sold. Jason was devastated, recognizing the potential of a home with so much square footage, but Richard was relieved. “It took the onus off of me to have to make a decision.”

By the following day, Richard began to regret having lost the property. “I started turning things over in my head and thinking about the fact that there’s two parking spots, it was so big, and we could have renovated it and really made it something our own.”

Matt and Madalin encouraged them to see other properties to gain perspective on the alternatives. While this was helpful, it also reinforced for Richard how much he did indeed want that first place they saw.

Just a few days after the disappointment of losing their ideal property, it came back on the market. It turned out that the initial deal fell through because of financing.

In the meantime, Matt and Madalin had shrewdly surmised that the home was likely being sold because of a break-up and there would be value in submitting an offer with the shortest possible closing date.

“Matt had such a good sense for what the seller wanted. I don’t know how he does it,” says Jason.

This time, Richard and Jason were ready to move quickly. Matt and Madalin recommended they go in at or just below the asking price, that they waive financing (figuring the seller might be sensitive to that condition) and that they offer a closing date of less than 30 days, after first making sure that Richard and Jason could handle the overlap in rent commitment and a new mortgage.

For rookies Richard and Jason, it was a tense 24 hours waiting for the sellers to respond. Matt assured them that it was normal for a seller to wait until the last minute to accept, in case another offer came in.

“He was really good at navigating us through that process and mitigating our anxiety,” says Richard. A few minutes before the deadline they got the good news.

Two months after moving in, they still find themselves wondering if it’s real.

“We went from second-guessing whether or not we can buy a toaster oven for the kitchen (because there was no room in the condo) to having to decide which room to put the living room in; that’s literally how much space we have now,” says Richard.

Adds Jason: “We ask ourselves, ‘How did we get so lucky?’”

There are a few things they learned along the way.

“I’ve learned that there’s multiple ways to get to where you want to go even if your first path is not the easiest and didn’t pan out for you,” says Richard. In other words, persevere.

Jason says he’s learned a lot about their relationship. “It was really important for us to be patient with one another in terms of what we wanted,” he says. “It’s really easy to get disillusioned by what’s available or what’s not. But we really stuck to what we wanted and we did get really lucky with space.”

The one tip they’d pass along to others:

“Use Matt and Madalin,” Richard says. “I would definitely recommend them for any first-time buyer.”